The best Twitch and YouTube channels for .NET developers

A great way to learn the newest technology available in .NET is through live streams and live coding sessions. You can find a lot of streams on both Twitch and Youtube. This opens up for a new way to follow some of the biggest names in the industry and learn from them. In this article, we will explore some of the biggest channels that live stream regularly. This is part of our series Learn about .NET.

James Clancey is a Program Manager at Microsoft and has a lot of experience with mobile development. On his stream, he works on his hobby projects, like gMusic a Xamarin Forms app for iOS and Android and sometimes experiments with virtual reality in Unity.

As one can guess from the name of the channel, the flow of the channel is Ryan live streaming in his garage. The primary project that he works on while streaming is the Tulsa .NET User Group's Razor website, where he also experiments with different new features in .NET and collaborates with the community. 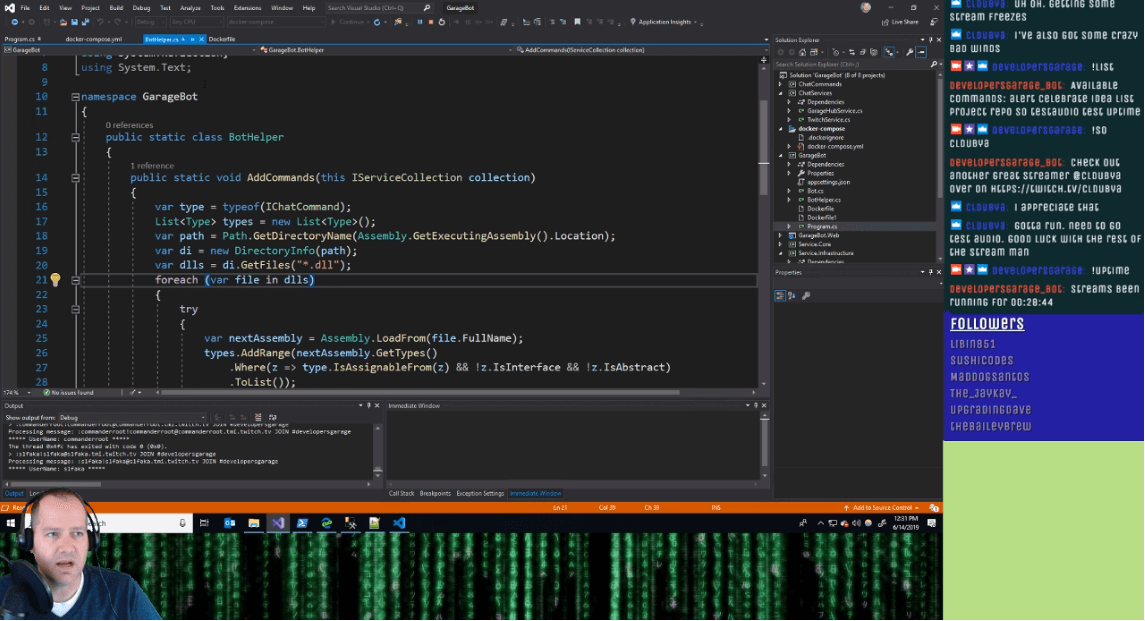 James Montemagno works as a mobile developer at Microsoft. His primary toolset for development is Xamarin. This reflects on the projects that he works on while live coding, but he has also experimented with some .NET Core and web development. He is of course also known for doing the podcast Merge Conflict with Frank Krueger, which he also live streams on Twitch

Mark Miller hosts CodeRushed pretty often on Twitch. He works on hobby projects using WPF, Typescript, and .NET in general. One project that he has recently worked with is a gamemaster tool for D&D. His older episodes can also be found on his youtube channel Mark Miller.

Gary Ewan Park works at Chocolatey and loves the art of automation. In his streams, he talks about his personal projects like Cake (C# Make) and works on new projects to amaze.

Visual Studio also got a channel on Twitch. They host different community live streams like Community Standup. They also use the channel for big announcements where the lead developers of .NET talk about new features and future changes.

Csharpfritz is frequentley uploading videos about the newest features in .NET. He mostly experiments with the new functions in ASP.NET and often invites friends to the stream to discuss a new feature. His older streams can be found on his Youtube channel Jeffrey T. Fritz.

Frank Boucher has been working with cloud technology for a long time. On this channel he explores the capabilities of Azure. He works on small projects to try out Azure, but also have sessions where he try to learn while streaming. More of his videos can be found on his Youtube channel Frank Boucher.

Immo Landwerth, also known by the handle terrajobst, is a Program Manager at Microsoft. He likes to program on a theoretical level, and his live coding sessions work with projects like Minsk, which is a compiler written in C#.

David Ortinau is a Program Manager at Microsoft. He works with Xamarin Forms projects while streamning. He often invites guests to the stream as well. These guests then develop a project together with David and they show of their specialties.

Corey Weathers has worked in the .NET industry for some time. He has two series running on his Twitch channel. The first series is targeted people who are new to the .NET stack and explores the fundamentals of .NET. In the second series, he works with .NET and Twilio, but on an intermediate/professional level.

These are just some of the channels that talk about .NET. If you have any feedback or if you follow a channel that was not featured on the list, then please reach out.