Debugging System.NullReferenceException - Object reference not set to an instance of an object

Time for another post in the series Debugging common .NET exceptions. Today's exception is, without a doubt, the error most people have experienced: System.NullReferenceException. The exception happens when you try to invoke a reference that you were expecting to point to an object but in fact, points to null. Let's get started! 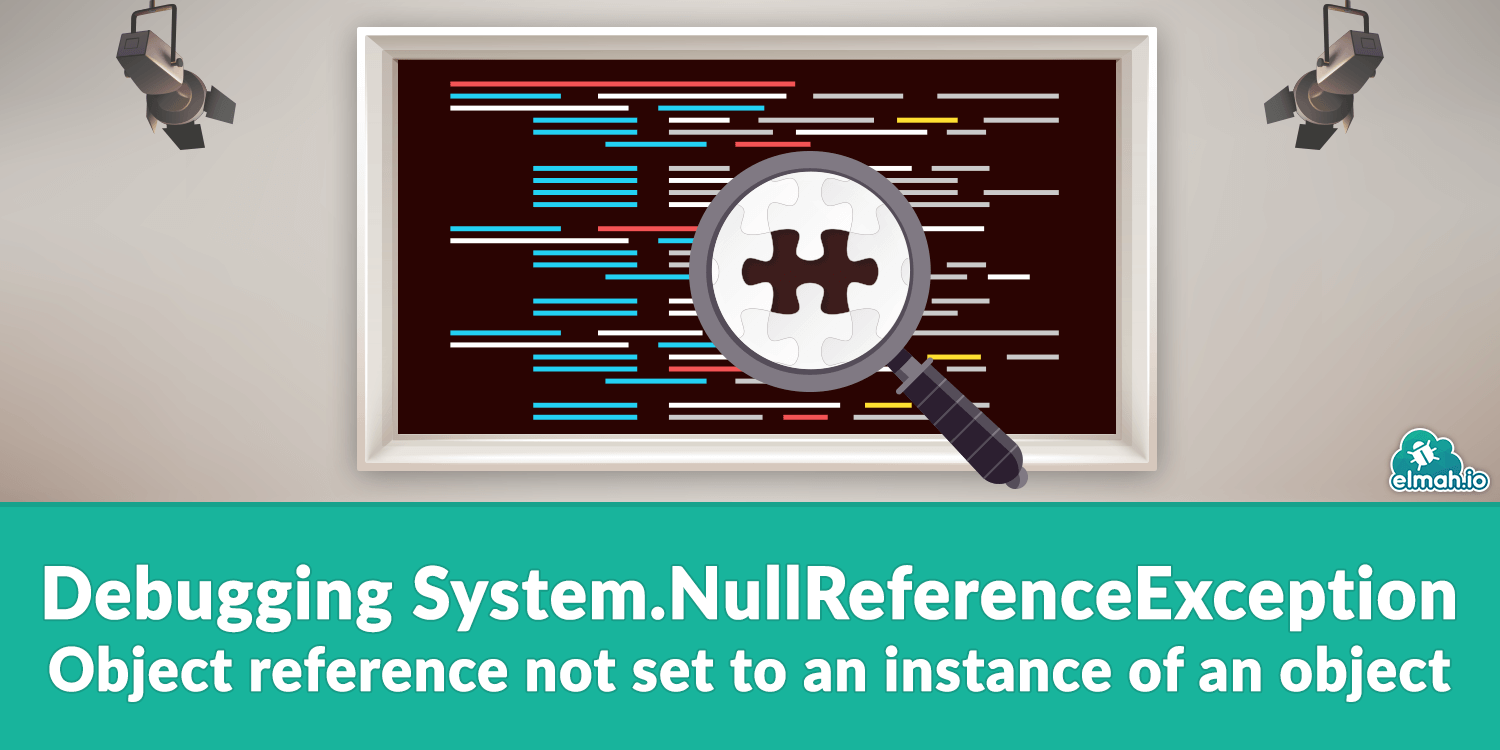 Running the code above will produce the following error:

System.NullReferenceException: Object reference not set to an instance of an object.

We already know why the exception is happening. Something is null. When looking at the code above, it's clear that s is null and the stack trace even tells us that:

Sometimes spotting what is null can be hard. Take a look at the following example:

If the code above throws a NullReferenceException, what is null? service? The result of GetUser()? Address? At first glance, Visual Studio isn't exactly helpful either:

There is a range of different ways to find out what is going on. Let's look at the most commonly used ones.

Spotting which call that caused an error is a lot easier if the calls are split into multiple lines:

Running the code reveals the actual call causing the exception:

In the example above user.Address returns null, why address.Street causes the NullReferenceException.

While splitting code into atoms like this can help debug what is going wrong, it's not preferable in terms of readability (IMO).

If you are on Visual Studio 2017 or newer (if not, now is the time to upgrade), you will have the Null Reference Analysis feature available. With this in place, Visual Studio can show you exactly what is null. Let's change the example back to method-chaining:

To enable the analysis go to Debug | Windows | Exception Settings. Check Common Language Runtime Exceptions (if not already checked) or extend the node and check the exceptions you are interested in. In this case, you can check System.NullReferenceException. When running the code, the debugger breaks on the NullReferenceException and you now see the Exception Thrown window: 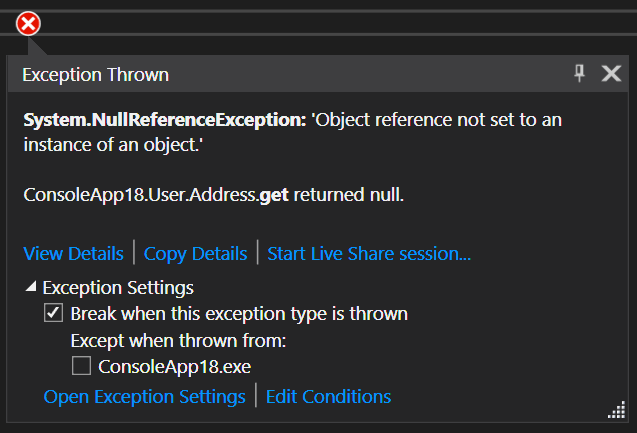 Voila! The window says "ConsoleApp18.User.Address.get returned null". Exactly what we wanted to see. This will require you to run the code locally, though. If you are experiencing the exception on your production website, the Null Reference Analysis will not be available, since this is a feature belonging to Visual Studio (unfortunately). With that said, you can attach a debugger to a remote site running on Azure as explained here: Introduction to Remote Debugging on Azure Web Sites.

There are various ways to fix NullReferenceException. We'll start with the simple (but dirty) approach.

If null is an allowed value of an object, you will need to check for it. The most simple solution is to include a bunch of if-statements.

The previous code will only reach address.Street if everything else is not null. We can probably agree that the code isn't exactly pretty. Having multiple nested steps is harder to read. We can reverse the if-statements:

Simpler, but still a lot of code to get a street name.

C# 6 introduced a piece of syntactic sugar to check for null: null-conditional operator. Let's change the method-chain example from before to use the "new" operator:

The ? to the right of each variable, corresponds the nested if-statements from previously. But with much less code.

Use Debug.Assert during development

When getting a NullReferenceException it can be hard to spot the intent with the code from the original developer. Rather than including if-statements, it can be clearer for future authors of your code to use the Debug.Assert-method. Much like in a xUnit or NUnit test, you use Assert to verify the desired state on your objects. In the example from above, the service object could have come through a parameter or a constructor injected dependency:

To make a statement in your code that service should never be allowed to have the value of null, extend the constructor:

In the case MyClass is constructed with null, the following error is shown when running locally: 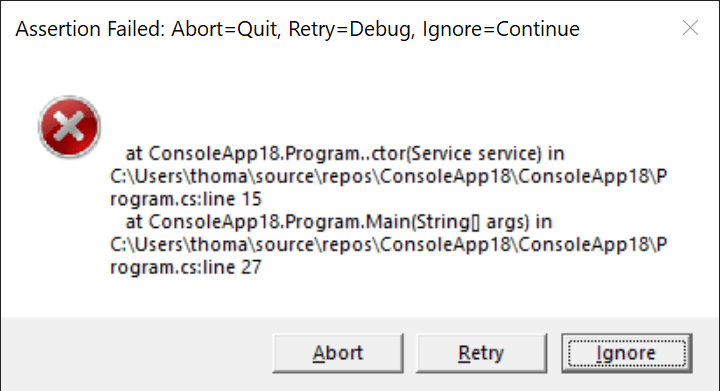 Use nullable reference types in C# 8.0

When designing code you often end up expecting parameters to be not null but end up checking for null to avoid a NullReferenceException. As you already know, all reference types in C# can take the value of null. Value types like int and boolean cannot take a value of null unless explicitely specified using the nullable value type (int? or Nullable<int>). Maybe it should have been the other way around with reference types all along?

To enable not nullable reference types, create a new .NET Core 3 project and add the following to the csproj file:

You should be on C# 8 already, but to make it explicit, I've added the LangVersion element. The Nullable element enables nullable reference types. Out of the box, C# 8 creates a warning if it identifies the use of null where a value is expected. Let's see how that looks:

When compiling we see the following warning:

I know you are not one of them, but some people developed a warning-resistance which means that warnings are simply ignored. To overcome this, make sure that errors like this causes build errors over warnings by adding the following to csproj:

This will tell the C# compiler to treat these four nullable reference type warnings as errors instead.

Just to make it clear, allowing null in the msg parameter, you use the ? characters as with value types:

Logging and monitoring for null reference exceptions are a must. While some developers tempt to create control flow from exceptions (no-one should), null reference exceptions should never happen. This means that a System.NullReferenceException is a type of exception that should always be logged and fixed. A null check through either an if statement or the null-conditional operator is always the preferred way of handling potential null values. But make sure to implement a logging strategy that logs all uncaught exceptions, including the System.NullReferenceException.

When logging a System.NullReferenceException in a log file, database, elmah.io, or similar, it can be hard to spot what is null. You typically only see the method-name that causes the NullReferenceException and the Null Reference Analysis feature is only available while debugging inside Visual Studio. I will recommend you to always Include filename and line number in stack traces. This will pinpoint the exact line where the error happens.